A Stone of Hope

A few days before I was born, Rosa Parks refused to give up her seat on a Montgomery, AL bus precipitating a 13-month boycott lead by a young Martin Luther King, Jr to desegregate the city’s public transportation. I was 8 years old when Martin Luther King, Jr gave his famous “I have a Dream” speech at the Lincoln Memorial. I didn’t understand all that was said but I knew that negro people given that much time on TV was very important. The people marched.

“We will not be satis­fied until justice rolls down like waters and righteousness like a mighty stream.” 1963

I was 12 when Martin Luther King, Jr said he’d been to the mountain top just before he was assassinated. I cried. We’d lost our leader and our world would be forever changed. I was angry. Peaceful protests weren’t the answer anymore. I joined in the violence. That was the way to be heard. But my parents still believed. They talked with my sister and me about what Martin Luther King, Jr stood for and that the best way to honor him was through determined and peaceful protest and pressure on those in power. So I marched with my parents.

A year later I became a student at a private all-girls school and my world went from all black at home to nearly all white at school. The school was college prep and forward thinking. My fellow students scrutinized my work and grades. My afro was touched a million times. I was called names by opposing sporting teams. And some classmates thought it was hilarious when one of them spit drinking fountain water on me. Black Power and Black is Beautiful operated at home and in my community. They were hard concepts to believe in when your classmates were “just playing around”. The struggle, internal and external, continued.

Over the years I have had successes, promotions and awards. I’ve also had my hair touched, been name called, watched and ignored because of the color of my skin. A few years ago, I stood in front of the Martin Luther King, Jr Memorial in Washington DC and looked up onto the face of Dr King. I shivered. It was the same face that hung in my grandmother’s parlor and my parent’s dining room. Here was a solid representation of the man who inspired so many to seek and demand the rights and equality that were rightfully theirs. I felt small. I felt inspired. I march forward and struggle on.

“We will be able to hew out of the mountain of despair a stone of hope.” 1963 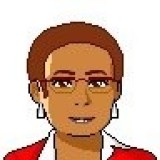 Eva Patterson is the Branch Manager of the Civic Center Library and a devoted fan of women’s basketball.