The name of the new RBDigital app may display as “OneClickDigital” as they are still in the middle of changing branding – the name should change to RBDigital soon
For all of us who’ve been using Zinio to download magazines to our computers, iPad, and other devices: there’s change on the horizon. Zinio for Libraries will soon be re-branded as RBDigital. They are also releasing a new app that will replace the Zinio app.

A preview of the new app featuring eBooks and eAudiobooks. NOTE: Our version will only have Digital Magazines

Here are some Questions and Answers about the new app and name. If you have any questions, please contact us and we’ll get you sorted.

You can read more about Digital Magazines and download the app here: DIGITAL MAGAZINES

Why are they changing the app?

The claim is the new app will be easier to use and more integrated with your device’s operating system. We haven’t tried it yet ourselves, but we’re keeping an open mind!

When is this happening?

Today! The new app was released at the big yearly library convention (ALA Annual) and tonight they will be doing behind the scenes work to get the new app out. They will migrate the app and website at approximately 5pm PST on June 26. They expect the migration to take around 14 hours, so patrons will see the new app and website on the morning of June 27.

What will happen to the Zinio app installed on my device?

Starting around July 10, users will receive a notification within the current Zinio for Libraries app alerting them to the availability of the new RBdigital app and giving them the option to download it. The message will also show a counter counting down the timeframe for when the app will no longer function (currently planned for Sept. 8).

What will happen to the Zinio name?

What does RBDigital stand for?

It stands for “Recorded Books Digital” – the parent company started out as a supplier of audiobooks in tape and CD format. It doesn’t make much sense since we only get magazines from RBDigital. But it’s a nice bit of trivia! 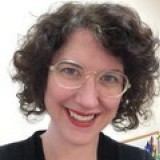 Jen Robinson is the Digital Initiatives Manager for the Marin County Free Library. She enjoys reading realistic fiction and her dream author date would be a tie between Ray Bradbury and Maurice Sendak.