(transcribed and edited from an oral interview) 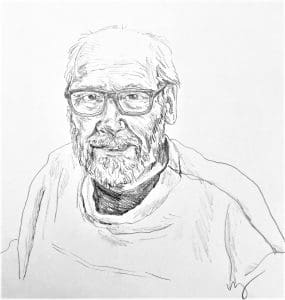 Richard Pfeffer has been Bolinas resident since 1973,  coming originally from upstate NY. After living briefly in the East Bay he made his way to Bolinas.” Love brought me to Bolinas. I followed a woman who wanted to live in the land of the poets.” He first worked at the Bolinas School as a teacher’s aide for 3 years and for the past 11 years has been working as a route person delivering mail for the Bolinas Post Office. Richard is a voracious reader and has been a library user from day one.  He lives with his longtime partner, Tania Bedford.

What are you reading now?  Do you read one book at a time or several?

Do you like reading paper, ebooks or audio books?  How about DVDs?

Another format that I like and that has influenced me in my life are plays, mostly read and particularly Ibsen, opens a new window.

Are you a browser in the library or do you know in advance what you are looking for?

Actually both: I browse in the library and use the catalog and Link+ too. I’ve been searching for things in the library since the days of the card catalog and now I browse the online one. I sometimes need to use Link+ when I can’t find what I want in the collection.

I recently found the Diaz book, This is How You Lose Her, opens a new window, by browsing in the Bolinas Library. It is not a book I would ordinarily search out but browsing leads to chance findings. Though I can’t say that I liked it all that much.

What was your reading experience as a child? Did you use the library?

I’ve been a library user since I was 5 years old. I remember the library in my home town well. There was a big drawing on the wall of a man lying down with little people threading threads over his body. Much later I found out it was Gulliver's Travels, opens a new window but not until high school. I read a lot of science fiction as a teen that I would take out from the library. I really grew up on science fiction but gave it up in my 20s.

Until I got to Bolinas I found librarians a bit intimidating but after arriving here I got along with them all. Librarians contribute so much to the library and have helped me find specific books and movies.

Are there any books that made an impression on you in your younger years?

I read Crime and Punishment, opens a new window (Fyodor Dostoyevsky) in high school and went back to it later and was overwhelmed by it. It is one of my favorite books. Summerhill, A Radical Approach to Child Rearing, opens a new window (Alexander S. Neill) also made an impression and later when I worked with kids at the Bolinas School, opens a new window in the 70s, these ideas were very helpful.

I also got into biographies, history and the history of universe, development of earth, psychology etc. I read a little Freud , opens a new windowbut became disillusioned with him. One biography I remember well is Clarence Darrow for the Defense , opens a new windowby Irving Stone. It gave me more of an understanding of the American system.

I read a lot of poetry earlier in life. Poetry has a lot to do with music. I particularly remember and love the section of Leaves of Grass , opens a new window(Walt Whitman) about friendship.

The first true moment of joy
was
when man first learned to cry.

The beginning of truth
was
the first lie.

Do you plan what you want to read next? Are there books you always meant to read?

Not at this point in my life. These days, I’m mostly looking for diversion, although I do have a short list of books that I would like to read but probably never will. That list includes Don Quixote, opens a new window (Miguel de Cervantes Saavedra) and Remembrance of Things Past, opens a new window (Marcel Proust).

What are some of your favorite books that you have read?

What I look for in a book of fiction is something that will touch my heart and be believable.

My favorite book used to be Tom Jones, opens a new window (Henry Fielding).  Other favorites include Mill on the Floss, opens a new window, a novel by George Eliot. Her characters are sympathetic, rounded and loveable and she believes in the human race.

Sot-weed Factor, opens a new window (John Barth), not as great but about the destructiveness of innocence.

Other authors I like are Nabokov, opens a new window; great writing, extraordinary, but I find that there is no heart in his books.

The Way We Live Now, opens a new window by Anthony Trollope is another favorite; a good book with a strong woman character.

Are there any books we would be surprised to find on your shelf?

The UFO Enigma: A New Review of the physical evidence, opens a new window (Peter Sturrock)

Are there any books you would recommend?

The UFO Enigma. I got it in the library and eventually had to buy it. Surprising for me because I’m a born sceptic but he won me over. I believe there are unexplainable incidents.

Are there any famous authors you wish you had met?

Not really, however I do really like Herzog, opens a new window films. Again, they show how blind pursuit of something can bring destructiveness and makes one question the value of blind seeking.

I used to read in bed, but now I read in my reading chair in the living room and listen to classical music too. I also get music CDs from library sometimes.

Because it puts me in touch with different ways of being and the depth of history. Beyond that, it opens up the world and also extends to the size of the universe and its variety. If it’s good and the characters are convincing, books can give me a good sense of what it must have been like to live in the 18th century in Britain.  Reading opens up a way to learn more about people.