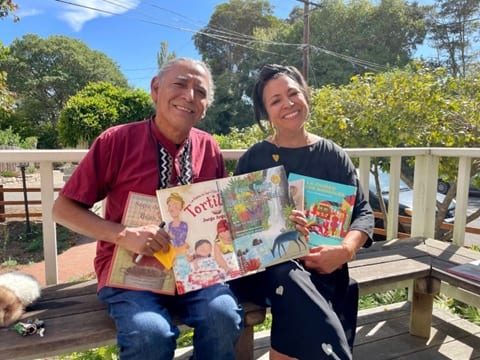 We started the day off early, heading from Novato towards Inverness, aiming to be there by 9:30am. It was a postcard perfect early autumn day in Marin County and the drive over the hills, through the forest and past the picturesque reservoir was a smooth one. We landed on the sunny porch of the Inverness Library, which is housed in a charming Victorian cottage that also serves as the Jack Mason history museum. There to greet us with the doors open was librarian Alex Porrata, who had tea waiting and a stack of Jorge's books out, some of which were from her own personal collection. Alex's daughter, a teenager, saw Sopa de Frijoles in the pile and said "Awww, this one was my favorite as a child!" Jorge was pleased to hear it and talked about the recipe for bean soup included in the book.

A multigenerational group soon gathered to celebrate the start of Latino Heritage month and the launch of StoryWalk, which features Jorge's book Agua, Agüita. StoryWalk places pages of the story along walking paths in neighborhoods throughout the county. We listened to him read his book and tell stories about water, corn, tortillas and about life. 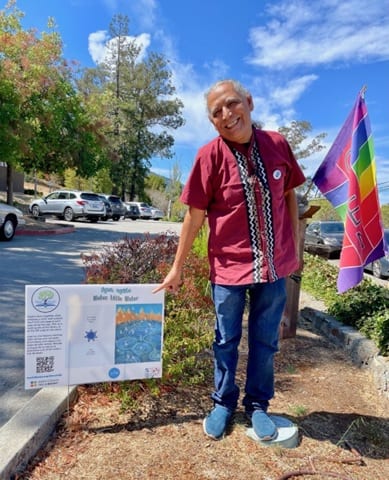 Jorge is a natural storyteller and throughout the day I heard tales about some of his many adventures which have led him from his home in El Salvador all over the world. Poetry, words and writing opened these doors to him, creating many opportunities and forging unexpected friendships across the globe.

For lunch, we ate turkey sandwiches outdoors at the IP Market and I learned about The Library of Dreams, La Biblioteca de Sueños, the small reading room he created in Santo Domingo de Guzmán so that children there would have access to books for the first time. Though we come from vastly different backgrounds and cultures, Jorge and I both firmly share the belief that children need books and that books can change lives. Before setting off again, Jorge pointed out an apple tree across the street that I had failed to notice and we stopped to take a photo of and admire its abundant beauty.

Our next stop was the Corte Madera Library. As we pulled into the parking lot, we immediately spotted one of the StoryWalk panels from Agua, Aguïta and we stopped to take a photo. Jorge was delighted to see another story panel as we approached the door to the library! Agua, Aguïta, which is also written in Jorge's native language of Nahuat, features the story of the water cycle from the perspective of a tiny droplet. 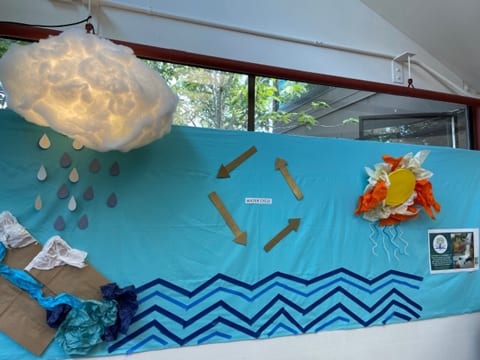 As we entered the children's area of the library we were warmly greeted by librarian Sarah Butts, who had made an excellent wall display of the water cycle featuring a glow cloud!

At 2pm, an eager audience participated in the interactive, trilingual storytelling session, featuring a multisensory water ritual with fresh-picked flowers and refreshing splashes of water. One family rushed in towards the end of the program, apologizing they were late. They came specifically to meet Jorge and carried with them their own copy of A Movie in My Pillow, one of Jorge's early books which he graciously signed for them. They were thrilled to also receive a personalized, signed copy of Agua, Aguïta, which were provided for all program attendees through the generous support of the County Friends of the Library.

As we left the library, Jorge said he was going to find and visit another StoryWalk panel located on the path across the street. With that, our paths diverged and we promised to be in touch. A sunny and satisfying day of story adventures had come to a close.

All ages are encouraged to participate in StoryWalk and experience their own book-inspired journey in neighborhoods across the county. Visit marinlibrary.org/storywalk to see the routes. StoryWalk continues until November 10. We'd love to hear your story!