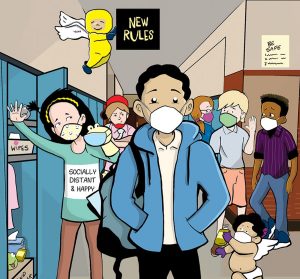 Jerry Craft, opens a new window, who was awarded the 2019 Newbery Medal for his graphic novel New Kid, opens a new window, has the distinctive ability to create stories about connecting with others and bringing people together. His unassuming ease and wit are readily apparent, whether meeting people in person or via Zoom.

A fixture in the world of comics and middle grade novels for decades, Jerry has penned over 20 picture books, graphic novels, and books for middle school students. He composed the comic strip Mama’s Boyz, opens a new window from 1995 to 2013 and is one of the few African American syndicated cartoonists in the country.  He co-founded the Schomburg Center for Research in Black Culture, opens a new window in Harlem which sponsors the annual Black Comic Book Festival (BCBF). Jerry received a BFA from the School of Visual Arts in New York City and currently lives with his wife and two sons Jaylen and Aren in Connecticut.

It has not been an easy road for Jerry. In his early years of cartooning, he received many rejections like “Black comics are only read by Black kids, and Black kids don't read.” Not to be deterred, Jerry self-published his cartoons doing entire projects himself, including marketing and promotion.

As a kid, Jerry's reading domain consisted of superhero comics. He did not enjoy books. He wanted to read stories with characters that looked like him and his friends from the Bronx, having fun doing ordinary kid things like riding bikes and playing games. When he became a cartoonist and author as an adult, those were the books he was determined to write.

Then he became a father and reading stories was a bedtime ritual. He couldn’t find books with characters that looked like his sons being regular kids, instead of dealing with weighty issues like slavery, civil rights, and police brutality. While those themes are important, books that typify kids just being kids, such as Diary of a Wimpy Kid, opens a new window, Dog Man, opens a new window, and Smile, opens a new window, are also essential.

Jerry aspired to write a novel about an African American kid living in a stable home with a mom and a dad and friends on his block, where nothing dreadful happens (microaggressions aside). New Kid, opens a new window is that story. He has received more letters from readers across the country about the strong family bond than anything else. Jerry has resolved to

“give kids stories that are family-oriented, contemporary, and funny…full of humor and hope.”

To avoid becoming an “angry” story, he recognized it had to be engaging, and it had to be funny. There are few books or movies with humorous African American protagonists, particularly teens. Jerry wanted to create a character who was African American but had a universal appeal for all kids to see themselves as “kindred spirits.” African American characters often deal with the weight of the world where every day is a struggle. Ultimately, it had to be an entertaining book that would ignite a conversation for change.

“Kids want to be Harry Potter. They don’t want to be the miserable kid who’s always suffering.”

New Kid, opens a new window is an #OwnVoices story inspired by Jerry's experience going to an academically rigorous school in a wealthy white community while living in an African American neighborhood. Like Jordan, Jerry's parents did not want him to go to art school because they didn't believe artists could earn a living. He mixed his son’s familiarity with social media and private schools in Connecticut to the story to give it a modernized quality.

What is Jerry most proud of about New Kid, opens a new window? He achieved his objective to represent all types of African Americans in the same story. No character is better than another, just different. That was important to him for both kids and adults to recognize.

One of his favorite scenes in the graphic novel is when Jordan is waiting for his Dad to pick him up from school. Alexandra, supposedly the weirdest kid in his grade, sits down next to him. He wanted to make readers laugh, encourage them to let go of their judgments, and open up their minds and hearts to see other people as authentic.

The message Jerry hopes that readers of all ages take away from the story:

“when you see kids of color, make sure you see them as kids first.”

Jerry’s message to aspiring writers and illustrators is: what matters most is how hard you practice at what you want to do. Let go of perfectionism and self-criticism. He’s always loved to draw but has not always been good at it. He drew stick figures when he was in 7th grade. Don’t just spend a little time drawing and most of your time erasing. Give yourself a break! The same applies to writing. If you get stuck, take a breather, go for a walk. "We have two ears and one mouth, so we should be listening twice as much as we talk."

His newest graphic novel Class Act , opens a new windowis a must-read. Request it now! What do you think will happen to 8th grader Jordan Banks at Riverdale Academy this year?