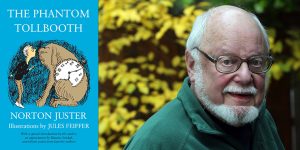 A piece of childhood that many parents will long remember is reading The Phantom Tollbooth, opens a new window. Yet parents may know little about the multidimensional author Norton Juster, who passed away on March 8, 2021 at his home in Northampton, Massachusetts from complications due to a recent stroke. He was 91.

As an educated and practicing architect in New York, Juster received a grant to make a book on cities for children. Although he began the book with great enthusiasm in 1958, he found himself “waist-deep in stacks of 3-by-5 note cards, exhausted and dispirited.” Juster realized he had no desire to continue and needed to start thinking about something other than cities.

“I had been an odd child: quiet, introverted, and moody. Little was expected from me. Everyone left me alone to wander around inside my own head. When I grew up I still felt like that puzzled kid — disconnected, disinterested and confused. There was no rhyme or reason in that kid's life. My thoughts focused on him, and I began writing about his childhood, which was really mine.” 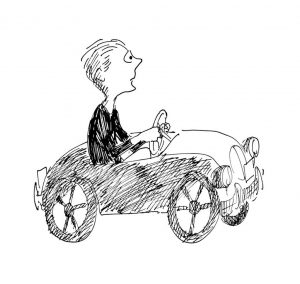 Thus became the origin of Milo, the main character in The Phantom Tollbooth. After receiving an “unexpected gift one day: a highway tollbooth, a map and directions to a place called the Lands Beyond," Milo goes on a “journey of discovery to Dictionopolis, the kingdom of words, to Digitopolis, the land of numbers, escapes from the doldrums, goes astray by jumping to the Island of Conclusions and at last rescues the two princesses, Rhyme and Reason, from the Castle in the Air.”

Juster described The Phantom Tollbooth as “my accidental masterpiece, opens a new window." The book has been widely acclaimed for decades but received a sizeable amount of disapproval when it was originally published in 1961.

He paid no heed to critics claiming the book was not for children, to which he responded “it wasn’t really a children’s book.” Publishers criticized it for having complex issues and difficult vocabulary. “My feeling is that there is no such thing as a difficult word. There are only words you don't know yet.” And some critics at that time believed "fantasy disorients children."

Born in 1929, Juster lived in a Brooklyn home filled with books and where storytelling was a common occurrence. He and his siblings loved to make up stories together, and Juster wrote short plays, placing family members in leading roles. "I lived for stories," he confessed.

Juster studied architecture, following in the footsteps of his father and older brother. He earned his bachelor's degree at the University of Pennsylvania and went on to study city planning at the University of Liverpool. Enlisting in the United States Navy in 1954, he developed a penchant for writing satirical tales to ward off boredom.

After being discharged from the Navy he started working at an architectural firm and took a teaching position and other jobs on the side. He shared an apartment with Jules Feiffer: friend, roommate, and in time, illustrator of this masterly blend of words and pictures.

Although Juster continued writing books over the years, his lifelong focus was on his architectural career and he served as a professor of architecture and environmental design at Hampshire College until he retired.

Parenting ahead of his time

Juster was an avid reader and gifted his love of words and stories to his own family after marrying his wife, Jeanne. On frequent walks, he held his toddler Emily in his arms while narrating observations around the neighborhood. Juster's enthusiasm for storytime rituals remained dear to his heart through the years with his granddaughter as well.

Today's child development experts emphasize the importance of talking, singing, and reading, opens a new window to children every day. Juster lived these practices before the science to prove the benefits were available.

Listen to this highly imaginative and progressive thinker talk about his life and work as an author in a brief video series, courtesy of Reading Rockets, opens a new window.