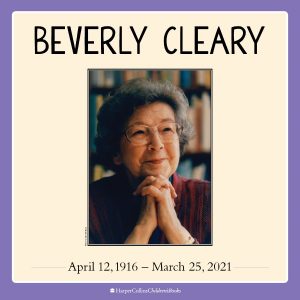 Beverly Cleary, opens a new window was adored by reading fans for decades, worshipped by rising authors such as Judy Blume, and cherished by readers who felt seen and understood through her iconic characters.

A renowned author who inspired a love of reading for generations of children, Beverly Cleary, opens a new window, died on March 25, three weeks before her 105th birthday.

As a trailblazer in mid-century children’s literature, Cleary infused humor, parents who were not perfect, and kids with real emotions into her stories with great finesse. She was not shy about expressing the drama of life. Yet her respectful characters "did not seek to get a laugh at the expense of another." These characters felt authentic and relatable to so many readers.

Even if you have not read Ramona Quimby, you probably know about her. A spirited child with imagination who was not afraid to push back and speak up when she disagreed with the rules or felt misunderstood. The characters Cleary created had emotional honesty, without excuses or immediate, tidy solutions. She painted an accurate portrayal of real life – with “everyday problems, small injustices, and perplexing mysteries.”

Cleary’s work lets children see themselves, but they also see us, their parents, saying all the things we so often can’t figure out how to say in our own lives.

Born in 1916, Beverly Bunn grew up on a farm in Oregon until her family moved to Portland when she was six years old. Her reading life was full of books about English kids who had nannies and pony carts or poor kids with an unknown rich relative who rescued them in the end. Cleary yearned to read about the kids she knew and played as she did. She had decided she was the one who was going to write them.

She began to tell her own stories, folklore, and fairy tales at schools and libraries in San Francisco after marrying Clarence Cleary, a graduate student she met at UC Berkeley. Those stories inspired her first book, Henry Huggins, opens a new window, a collection of stories rather than a novel.

When I began ‘Henry Huggins’ I did not know how to write a book, so I mentally told the stories that I remembered and wrote them down as I told them.

The popularity of ‘Henry’ spawned sequels and the expansion of Henry’s world. Ramona Quimby, the irritating younger sister of Henry’s friend Beatrice (“Beezus”), was introduced and became her most adored character.

As a young girl, Cleary described herself as “odd” and “serious." She was prone to colds and spent hours in her rocking chair seeking the laughter she was missing in her own life.

She once wrote in The Horn Book journal, “That little girl, who has remained with me, prevents me from writing down to children, from poking fun at my characters, and from writing an adult reminiscence about childhood instead of a book to be enjoyed by children.”

The characters and stories of Beverly Cleary are within the hearts of millions of readers, young and old. Her celebrated contribution to children’s literature will be her legacy for decades to come.