Even though it's not Jewish Heritage Month, which takes place in May, it's always a good time to learn more about Jewish history, art, music, and writing.

If you weren't able to attend our event The Story of the Czech Torah Scrolls: World War II to the Present, or even if you want a refresher, take a look at the presentation recording:

Our very own Osher Marin Jewish Community Center is proud to partner with the Memorial Scrolls Trust in London to prominently display Torah MST#732 rescued from the Czech Jewish community of Hostomice, a small town in Bohemia about 20 miles from Prague. The scroll is available for viewing in the Osher Marin JCC lobby.

Despite historic attempts at extermination, Jewish ways of life survive and thrive in diverse communities all over the world. Below you'll find a roundup of history, cultural interconnection, and present-day artistic expression.

*All links and summaries are from our Kanopy movie streaming service. You will need your library card to access Kanopy, and access is limited to MCFL patrons based on your home address.

, opens a new windowShalom Bollywood, opens a new window
A celebration of the all-singing, all-dancing history of Indian cinema, SHALOM BOLLYWOOD reveals the unlikely story of the 2000 year old Indian Jewish community and its formative place in shaping the world's largest film industry.

, opens a new windowYidl in the Middle: Growing Up Jewish in Iowa, opens a new window
Yidl in the Middle looks at growing up "different" in America. In this evocative, entertaining film, filmmaker Marlene Booth probes her Iowa-Jewish roots. Through home movies, period photos, her high school reunion, and current interviews, she examines the complicated process of negotiating identity -- as an American, a Jew, and a woman.

, opens a new windowhe Return: Young and Jewish in Poland, opens a new window
With the fall of Communism in 1989 a young generation of Polish Jews began learning their long-buried ancestry. The Return focuses on four women in their 20's who face the unique challenge of trying to create an identity in a vacuum, with little knowledge of their heritage. The Return depicts their valiant efforts at creating a new, authentic Jewish community in a country still regarded in the U.S. as the "Jewish graveyard."

Mah-Jongg: The Tiles that Bind
A light-hearted yet deeply moving portrait of the Asian- and Jewish-American women who play this centuries-old Chinese game, shedding light on the common and uncommon experiences of the players that simultaneously define and transcend cultural boundaries. Along the way, it proves again and again to be a bridge connecting seemingly unlike individuals, spanning generations, continents and cultures, and transcending classification as merely a game. 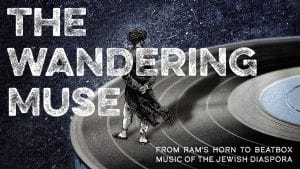 , opens a new windowThe Wandering Muse: Musical Interpretations of Jewish Identities, opens a new window
Using instruments as passports for millennia, wandering Jewish musicians are still among us. From ram's horn to beatbox, from Argentina to Uganda, THE WANDERING MUSE explores the kaleidoscope of Jewish identities through the ever-changing music of the diaspora. In constant motion, the film is a series of encounters with Jewish musicians from around the world.

When Jews Were Funny
Insightful and hilarious, WHEN JEWS WERE FUNNY surveys the history of Jewish comedy from the early days of the Borsht belt to the present, ultimately exploring the entire unruly question of what it means to be Jewish.

Anajnu Veatem, Mexico's Jewish dance group, assembled the choreography above in 2020 and put it online as a pandemic alternative to performing in one of Latin America's major festivals highlighting Israeli folklore.

Yael Mess is one of the few women singers in Israel's dancehall scene, a genre which originated in Jamaica in the 1970s and has become very popular in Israel. The word "gyal" is Jamaican pronunciation for "girl", and this article explores how it can mean something different when women use it in a male-dominated field.

From Ester Rada's website: "Ester Rada’s cross-cultural sound is a deep reflection of the Israeli born Ethiopian’s heritage. Growing up in a highly religious Jewish family in more than modest conditions in one of the roughest neighborhoods of Israel, gave Rada the drive to change her way of life and fulfill her dream of creating music."

From Yasmin Levy's website: "I started as a Ladino singer, before this music was known around the world. No one would listen to Ladino songs but somehow we managed to help breathe new life into them and today it has become well recognised. But I'm more than a Ladino singer. I see myself as a World Music singer, singing in modern Spanish as well as Ladino, and bringing the flavours I love. After 8 years talking about Ladino music and the Jews of Spain, part of my personal Libertad is about being able to sing Ladino songs because I love them; not because I'm expected to sing them. I sing Flamenco, Turkish music, Ladino, Persian music and mix them all together.”

The Queens-based Ensemble Shashmaqam features a group of leading Bukharian Jewish performers from Uzbekistan and Tajikistan. They perform a wide repertoire of the musical traditions of Central Asia, including wedding/folk music and the classical suites known as "Shashmaqam." Over the past thirty years, much of the Bukharian Jewish community has emigrated to Israel and the United States, with a local hub in Rego Park, Queens. 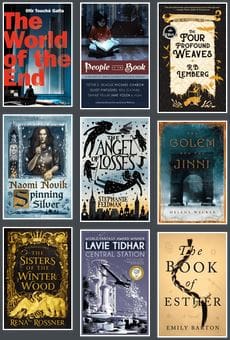 Last but not least, the beauty and wonder of Jewish experience can go so far as to reach outer space, or fantastical worlds besides our own, as you can see in this list of fantasy and science fiction works rooted in Jewish folklore and exploring Jewish themes.

From R.B. Lemberg's The Four Profound Weaves, where two trans elders journey across a desert in search of belonging and identity, to The Golem and the Jinni by Helene Wecker, in which the titular characters meet in late 1890s New York, these works use speculative elements to explore Jewish pasts, but also explicitly Jewish futures and secondary worlds.