This June, I keep thinking about this photo.

Taken in 1993 by Eric Luse for the SF Chronicle, the photo was captioned "The men in white are the surviving members of the original San Fransisco Gay Men’s choir. The others represent those lost to AIDS" (sic).

"The Gay Men’s Chorus posed to illustrate the impact of AIDS. Those dressed in black, with their backs turned, represent those who had died. Today, all their backs would be turned because the obituary list is now 47 names longer than the chorus roster. For each man singing these days, more than one chorus member has died of AIDS."

What does it mean to lose so many? For almost a whole generation of gay and trans elders to be wiped out?

What do we have left?

This year marks the 40th anniversary since the first cases of AIDS were identified by the CDC.

Also, according to CDC data, in the last 18 months the United States has lost 597,343 people to COVID-19. Just like with HIV/AIDS, it affected (and will continue to affect) vulnerable communities most intensely. Even while Marin and many other counties around California are steadily decreasing restrictions, and there's even talk of life "post-pandemic", not all parts of the United States and the world are so privileged. The effects of COVID-19 are likely to be felt for a long time to come. They ripple out to include preventable deaths caused by our healthcare system being overloaded, as well as the trauma of survivors and essential workers, whether in medical settings, grocery stores, or schools.

The success of COVID-19 vaccination campaigns can be partially attributed to the groundwork laid by HIV healthcare activism. Chris Beyrer writes in The Lancet that "when the US National Institutes of Health sought trial sites for the COVID-19 vaccine trials in 2020, it turned to the HIV research networks and trial sites. Until COVID-19, the HIV research effort was the largest in history devoted to a single disease."

Ironically, while those activist efforts never led to successful development of an HIV vaccine, it's possible that the mRNA technology used in COVID-19 vaccines like Pfizer and Moderna might finally make that happen. Moderna has moved into phase 1 human trials for an mRNA vaccine against HIV this year, and according to some early reports the results are promising.

In the meantime, if you're like me, you cope with the loss of so many people in our community by trying to connect with queer history. Watching historical documentaries like "Screaming Queens", which describes trans life in San Francisco's Tenderloin in the 1960s, almost gives me a sense of unreality. "You were doing what? You existed? In the 1960s??" Oh yes, sweet summer child. Even much, much earlier, than that. 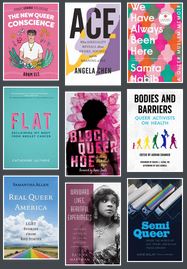 I seek out those voices from the past, and also remember that many survived. More than ever queer, trans, and intersex folks who have been pushed to the margins are making their voices heard. It might seem silly to counter grief and loss with book lists. But we assert that we are here, because otherwise the world might forget that we exist. Young folks might think they're the only ones of their kind, that there's no history or community for them. I want them to know there is such a thing as being not only lesbian, gay, and bisexual, but also trans, nonbinary, intersex, asexual, and aromantic.

What does it mean to lose so many?

I don't have any answers, only grief. But there is a space for you here, too. We can sit and grieve together.